Sometimes things hit you so suddenly and make you realise that this life is short really and we must do what we dream of as soon as we can.

I was incredibly sad to hear that my dear friend, David Pluth (a renowned Image Collection Photographer for National Geographic and a passionate educator), had died on assignment in Rwanda.

I worked with David on several projects and was proud to have had this opportunity. He was a great man to be around; passionate, dedicated, and Africa was flowing through his veins. To me he was a mentor, a colleague and friend a friend, and this world will miss his incredible eye through the lens.

We were only talking a few months ago and had been planning several photographic safaris to Uganda and Kenya with him David as the specialist photographer and educator educator. I will miss his support, guidance and friendship friendship. He died on the continent he loved.
Posted by Hayden Turner Private Safaris at 3:34 AM No comments:

We have just returned from an incredible 10 days at Murchison Falls NP in Uganda. It’s always a pleasure traveling with passionate people and Arthur Wickson was just that.

I took Dorothy and Arthur Wickson to Uganda five years ago and we had a wonderful safari: 10 days of gorillas, chimpanzees, tree climbing lions, giant forest hog and the list goes on. Arthur and I talked about a fishing experience in one of the most extreme fishing locations in the world, Murchison Falls, and last week his dream came true.

We spent seven days taking Arthur up and down the river fishing some of the most incredible locations Arthur had ever seen, and catching and releasing some of the biggest fish he had ever caught, including a 46 kilogram Nile perch!

Arthur’s passion is fly-fishing and this was very apparent as he was into it as soon as we got on the river. We motored up the river and arrived at the most spectacular scene on the Nile, the mighty Murchison Falls. We had only been there 25 minutes when Arthur hooked a wonderful 9 kilogram Nile perch on the fly and safely released it back into the powerful waters. His smile was ear to ear, and that was just the beginning of his 'boys own adventure'. We explored the river during the next seven days, catching incredible fish, seeing astonishing wildlife and finishing with champagne in front of the falls on our last sunset. This was all not to be upstaged by the leopard seen on a cliff on the way back to camp!

It was a great adventure and I look forward to having Arthur (and Dorothy) on safari again next year in Kenya and Tanzania for their 40 year wedding anniversary.
Posted by Hayden Turner Private Safaris at 3:31 AM No comments: 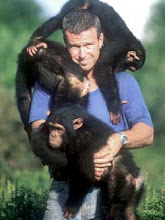